In case the autocreate-function is enabled (define autocreate autocreate), particular objects are created automatically. These definitions get stored in the configuration file used at startup.

autocreate is enabled after a default-installation of FHEM.

"Button" to save configuration changes 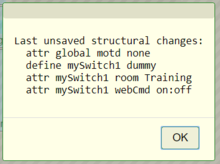 FHEMs configuration can be edited in several ways. The recommended way is using the command-field and the object-details. Or use the options of Raw definition, that can be accessed direcly by clicking the "+" left of the command field. All of the three offer syntax-highlighting and syntax check (to some extend).

Using the methods internal editor and particulary external editor should be seen as expert-mode and only used in special cases. Many of the (error checking-) automatics can't be used in this two modes. Especially mixing the editing-methods can result in unexpected or unwanted effects. E.g. no save config before rereading the configuration or restarting FHEM.

To see a list of unsaved changes, click on the red question mark next to the save config-link.

Using the command-input-field, which can be found on top of the page, is a quick and simple way to edit the configuration (e.g. define new or edit existing devices (de), create or edit attributes (de), etc.). The changes take effect right after pushing the Enter-key.

To save your changes, type save into the command-field or use the Save config-link on the left side of the page. Else all changes are lost after a restart of FHEM.

Detailed View of an Object

When clicking on the name of an object, it's details are shown on a new page. Depending on the type of the object, there are serveral ways to manipulate it's properties:

Changes to definitions take effect right after pushing the modify-button. When altering attributes or their values don't forget to use the attr-button.

To save your changes, type save into the command-field or use the Save config-link on the left side of the page. Else all changes are lost after a restart of FHEM.

If it's deemed necessary to edit the config-file manually, it's possible to use the internal editor. Sticking to the exact syntax of commands and definitions is inevitable, partially there are some special actions needed (escaping special characters, doubling semicolons, ...). After saving the changes, they get active immediately.

Using the internal editor to edit the configuration is locked by default. If you think it's absolutely neccesary to unlock this feature, have a look at the options of FHEMWEB in the command reference.

Autocomplete in command selection window ("se" has been typed, followed by Ctrl+Space)

To activate this functionality, set

Shortcuts for search and replace:

Have a look at the FHEMWEB attribut codemirrorParam also as well as additional parameters documented on the codemirror website. Examples:

This would change behaviour of TAB key to set 2 space characters (default: 4); also 'SHIFT+TAB' will only go back 2 space characters and auto completion (Ctrl+SPACE) will be deactivated (to be exact: show-hint.js and show-hint.css will not be loaded any longer); additionally, the highth of the editor field will be extended automatically to keep the entire content.

Defaults used by FHEMWEB (can be changed by setting the corresponding parameters in codemirrorParam attribute):

If syntax highlighting / autocompletion is activated, this affects

Discussion on codemirror in the forum.

It's also possible - though not recommended - to edit the configuration with an external editor. E.g.

Sticking to the exact syntax of commands and definitions is inevitable, partically there are some special actions need (escaping special characters, doubling semicolons, ...).

Syntax-Highlighting can be used with different editors. More about this under Syntax Highlighting with external editors (de).

Changes to the file will only take effect after rereading the configuration (rereadcfg) or restarting FHEM.

If needed, fhem.cfg can be splitted into multiple files. All files then have to be included in fhem.cfg with the command include (de). This is considered as "expert mode" and should (if at all) only be used by advanced users.

Configuration in a SQL Database

Since FHEM version 5079 it's possible to store the configuration in a database instead of a text-file. This is done by using configDB (module) and configdb (command)